5 Things to Know About Indexes for SQL Server

One of the first questions I got while interviewing for a potential position as a DBA was “If there is performance problem, where is the first place you would look?”

Now at this time, I was trying to move from Software Developer to DBA, and I answered that I would look at IO, Network and errors in code. The interviewer said, “Indexes.” I always assumed that all database designers knew you needed good indexes. This changed my thinking about what I was learning to start reading more about being a DBA. SQLServerCentral.Com became my friend and I started reading one article a day and answering the Question of the Day every morning when I got to work.

Filtered Indexes should be used carefully because they could become more of a performance problem with Insert/Update/Delete statements. They are really nice for large data warehouses where some tables are not structure. Also, I have seen them used for a column that has one value other than a empty value. Filtered indexes are new to SQL Server, so you should see performance improvements in future versions.

Now, this is really cool. With SQL Server 2008, the Query Plan now includes a Missing Index feature which basically gives you a hint on what index might be beneficial. Again, you should be cautious when it suggests include columns that look like all the columns in the table. See number 3 above. 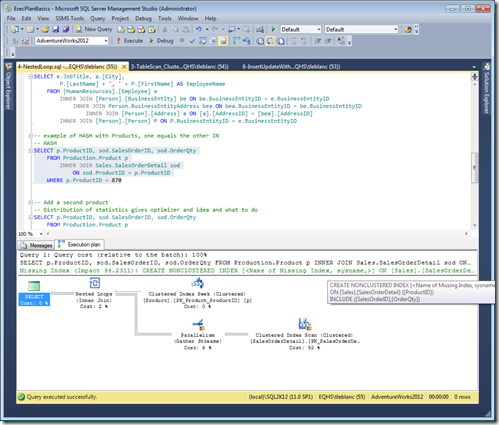 In conclusion, indexes are a great help with query performance. There are some basics shown above to get you started with understanding indexes. Do not close your mind to more information about indexes after you start to understand what was mentioned in this article. I know today after doing DBA work for over 10 years, there is always more to learn.

Posted by Thomas LeBlanc at 2:21 PM No comments: